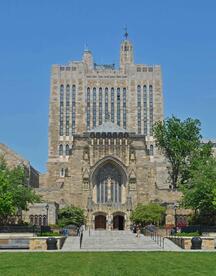 Yale is committed to improving the world today and for future generations through outstanding research and scholarship, education, preservation, and practice. Yale educates aspiring leaders worldwide who serve all sectors of society.
–Mission Statement of Yale University.

Berkeley students enjoy the educational and cultural resources of not only Yale Divinity School, but also Yale University and the City of New Haven.

Yale is synonymous with excellence in higher education, and graduate education in particular. Yale was the first US university to grant a PhD, and today the University includes both the Graduate School of Arts and Sciences and twelve professional schools, including YDS.

Sterling Divinity Quadrangle at YDS is a short walk to the rest of the Yale campus, and Berkeley students often take classes in the Department of Forestry and Environmental Science, the Department of Religious Studies, the School of Music, and the School of Management, to name just a few. Berkeley and YDS students can also get involved in student organizations, such a singing in the graduate student a cappella group the Yale Citations or participating in the programs of the Yale Chaplain’s Office.

In addition to the usual advantages of a college town, from its Ivy League sports events to lectures and concerts, Yale also features world-renowned museums, such as the Peabody Museum of Natural History and the Yale Center for British Art, and outstanding performing arts programs, from the Yale Rep Theater to Yale Opera.

The second largest city in Connecticut, New Haven has long been a cosmopolitan center of culture and the arts. Home to four universities and the largest medical health system in the state, the greater New Haven area is a thriving city that features museums, its own symphonic orchestra, the famous Long Wharf Theater, and a thriving food scene. A multi-ethnic city, New Haven also has an easy accessibility with strong, distinctive neighborhood identities.  The corner grocery or pharmacist are still familiar features of New Haven neighborhoods. For divinity students, the churches of New Haven and its environs also provide scores of opportunities for worship, service, and supervised ministry.

New Haven is conveniently located—an easy train ride to New York or Boston or a short drive to the coast communities of Connecticut and Rhode Island, as well as the backroad charm of New England towns and state parks.