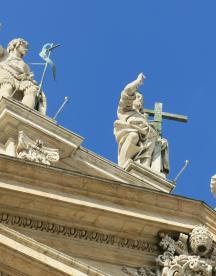 Berkeley Divinity School has a goal of helping students to build patterns of reflection and prayer that will sustain the vitality of their future ministries. To that end, each class makes an annual retreat according to the following pattern: Juniors: monastic retreat at the Order of the Holy Cross, West Park, New York; Middlers: Ignatian exercises at Mercy Center, Madison, Connecticut; Seniors: pilgrimage to Canterbury, England.  Regular quiet days are also offered that allow students to draw apart from the busy life of a seminarian to integrate what they have learned in the classroom with their own spiritual life. These quiet days are led by faculty or invited guests, often from a monastic community.

In addition, the School encourages students to make their own individual retreats by subsidizing the expenses of going to a monastery or similar retreat facility. For this purpose, Berkelely maintains an especially close relationship with the Society of St. John the Evangelist in Cambridge, Massachusetts, as well as their retreat house in West Newbury, Massachusetts; the Order of the Holy Cross in West Park, New York; and the Community of the Holy Spirit in New York City and their retreat house near Brewster, New York.

The senior class pilgrimage has become a climactic moment in the Berkeley experience. Traveling to Canterbury Cathedral for the winter reading period, students spend a week immersed in the life and work of this historic center of Anglicanism, shaped by the Benedictine pattern of prayer, work, and service. The Cathedral provides accommodation in its International Study Centre, and during the week the students hear from the Dean and Canons on various aspects of Anglican spirituality and life. The pilgrims also make trips to nearby sites such as St. Augustine’s Abbey, and the ancient church of St. Martin (the oldest active Christian church in Britain). After visiting the Cross of Nails at Coventry Cathedral this winter, one senior wrote, “The pilgrimage to Coventry touched at the heart of who I am as a broken human being enveloped by the mystery of God’s over-powering love in a fallen world.”

The pilgrimage has as its goal an experience of both the historical depth, as well as the contemporary breadth of the Anglican Communion. As a result, a trip into London is also incorporated into the pilgrimage so that students may visit such sites as the Anglican Communion Offices, Westminster Abbey, and Lambeth Palace. This trip is also designed to give the students an opportunity for reflection as they prepare to graduate and begin service to the wider church, many of them as new deacons and priests.

In addition to the senior class pilgrimage, a number of students arrange to make their own individual pilgrimages during their seminary years. Among the places that students have recently gone is the Community of Iona, Jerusalem, and Santiago de Compostella.

It was very important for me to be in a place where Anglicanism is lived, prayed, and learned, and I have certainly found that with the Berkeley Divinity School at Yale.
Rachel Hatch '08
Research Manager
Institute for the Future, Palo Alto, CA
It is impossible to engage in the Berkeley at Yale community without being truly transformed.
Will Mebane '06
Interim Dean
St Paul's Cathedral, Buffalo, NY