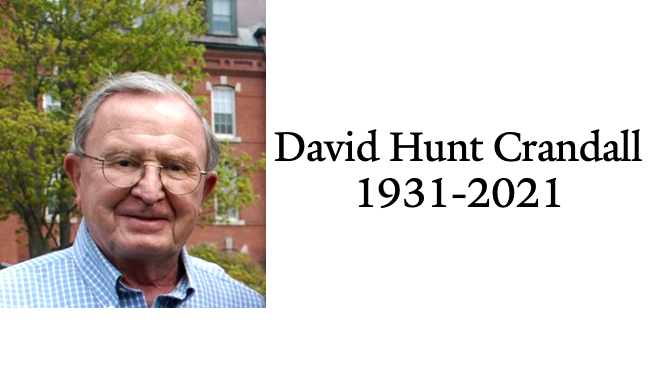 David Hunt Crandall, past Board Chair of Berkeley Divinity School at Yale

David H. Crandall died peacefully on March 13 with family by his side. He was 89 years old.

Born in Oswego, NY, Dave raised his family in Darien where he was exceptionally active in the life of the community, from church vestry member to volunteer firefighter. He also served on various town committees ultimately becoming Chairman of the Board of Finance for the Town of Darien.

After graduating from Colgate University in 1953 and then serving as a captain in the Marine Corps, Dave met Jane Fox in New York City. They married in 1959. Together they raised four children in Darien in a loving and nurturing home filled with cheerful energy, wonderful pets, close friends – and always sprinkled with a dash of irreverent humor.

Dave may be most remembered for his genuine connection with people. Regardless of one’s station in life, Dave had an easy way of bonding with anyone. When you spoke to him, you knew he cared about you.

Dave and his family were long-time members of St. Luke’s Parish in Darien where he served as senior warden among other volunteer roles. That participation in the church led to further involvement with the Berkeley Divinity School at Yale University where he served as Board Chair from 1991-99 and received an honorary doctorate degree in 1999.

In business Dave built a successful career in real estate, in the beginning as a commercial real estate broker with Charles F. Noyes Company, Albert B. Ashforth Co., and Cushman and Wakefield in New York. Ultimately he formed his own real estate development company, Lafayette Associates, in Greenwich. Among his larger projects were Canterbury Green in Stamford and Lafayette Place in Greenwich.

Alas, no remembrance of Dave would be complete without mentioning his passion for fire engines. Having served as a volunteer fireman with Noroton Fire Department, Dave loved everything about fire fighting. When he was a boy in Oswego his grandfather would take him to the local fire department to show him the trucks, and that boyhood fascination never left him.

Dave and his family were active members of Noroton Yacht Club and Wee Burn Country Club. An avid sailor, some of his happiest memories were sailing with his family on Long Island Sound and Buzzards Bay.

A service for Dave can be viewed via LiveStream on Saturday, March 20, at 10:00 a.m. by accessing the following link: https://events.locallive.tv/events/48528.