The Old Made New: The Senior Pilgrimage to Rome 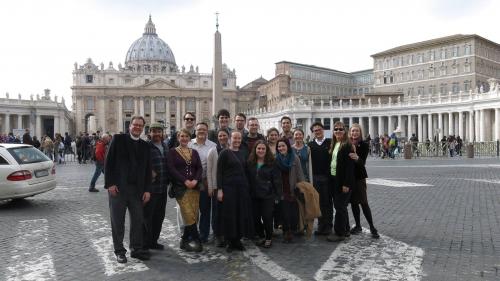 Marvelous ruins decorate and define Rome. In them, the old city shows its triumphs as well as its scars. The ruins testify to human glory from ages past. They also witness to the vigorous movements of the Spirit through the Church. The ruins tell a story. In many cases, Rome built new cities upon itself. Ancient buildings lie atop even more ancient buildings. St. Peter’s Basilica, for example, is built upon a Constantinian Christian altar, which itself is built on a pagan necropolis. The city travels through time on its own journey. Marble, stone, and soil testify to its intoxicating tales of imperial glory and sobering failures in its despairing defeat. Its story continues. The city remains the same, and yet new. Rome is not merely the destination of a pilgrimage. This earthly city adorned with ruins of a lost empire appears, itself, to be on pilgrimage. Gathered within this complex, broken, and holy city, the Berkeley Class of 2016 began its pilgrimage. As we walked the city each day, we were repeatedly reminded of the reality that all that was old is being made new.

The home base for our pilgrimage was the Anglican Centre in Rome, where jet-lagged and disoriented we entered into a small chapel, no bigger than our own St. Luke’s. Archbishop David Moxon greeted us. He explained that the chapel is believed to be built on the place where Gregory the Great commissioned Augustine to convert the pagans in what we now call England. This diminutive room, full of history, provided a link to our heritage as Episcopalians, as global Anglicans. We returned to it throughout our pilgrimage, to the familiar words of our liturgy and the nourishing Sacrament of the Eucharist.

The tone for our pilgrimage was set early. Upon arrival, Archbishop Moxon walked us through an ongoing excavation of a first century Roman apartment. Archeologists now believe this may be the location of St. Paul’s house arrest. Archbishop Moxon helped us to appreciate the history and holiness of the site and led us in prayer and a period of reflective silence. It was a piercing reminder of the reality of our Christian story. What felt like such an ancient story only days before became real and surprisingly current.

Each day we ventured forth to explore the layers of meaning and story within the city. Our interactions, however, were not simply with ancient crypts and frescos. We also met in dialogue with our Roman Catholic sisters and brothers, seeking to uncover layers of our shared histories, seeking even there to “make old things new.” Almost exactly fifty years before our pilgrimage, in March 1966, the Archbishop of Canterbury, Michael Ramsey, made a historic visit to the Vatican. He was the first Archbishop of Canterbury to be received at the Vatican since 1398. The Anglican Centre in Rome resulted from the dialogue between Archbishop Ramsey and Pope Paul VI on that visit.

We met with Father Anthony Currer, a Vatican official in the Pontifical Council for Promoting Christian Unity. The group discussed the relationship between the Roman Catholic Church and the Anglican Communion, the strain of the relationship in recent years highlighted by differing views on human sexuality and gender. However, Father Currer emphasized the importance of the shared baptismal covenant, Trinitarian doctrine, and mission. Those gathered expressed a deep desire to continue to walk alongside one another in a common vocation as Christians.

The final day of the pilgrimage, the group traveled to Assisi. Archbishop David led the group through the holy sites from the lives of Clare and Francis. These two saints inherited a culture of complacency in a secularized version of Christianity that seemed to have lost its heart. The Church seemed most interested in maintaining its own earthly glory. There was a disconnection from nature, a disconnection from the lives of the poor, and stifling limitations to women’s leadership. We were reminded of the striking similarity of history and the present day. Old things, in this way also, continue to become new.

In Assisi, we knelt together. We prayed in front of the San Damiano cross, as Francis did eight centuries earlier. God told Francis, “Go repair my Church, which as you see is falling completely in ruin.” In many ways, God continues to speak to us with a similar message.