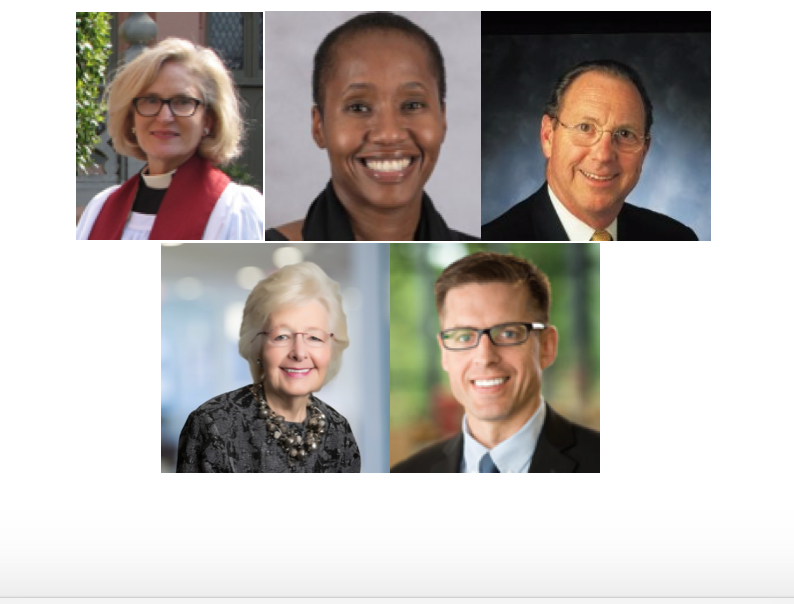 Berkeley Divinity School is pleased to announce the following new Board members, who bring a wealth of diverse backgrounds and expertise.  Trustee Linda K. Lorimer, vice-chair and chair of the Governance Committee, reports that they “are a remarkable group and will bring wonderful perspectives and counsel to the Board—and to our joint work in leading Berkeley Divinity School in these particularly turbulent times.”

The Rev. Katherine (Kit) Sharp McLean was born in New Orleans and grew up in Hammond, LA.  A graduate of Newcomb College-Tulane, she attended both Catholic and Episcopal churches when she was growing up, but was formally received into the Episcopal Church in 2002 at Palmer Memorial in Houston.  While working there as a volunteer, Kit sensed a call to the ordained ministry. She received a Master of Divinity from Yale Divinity School and a Diploma in Anglican Studies from Berkeley in 2013.  Ordained to the diaconate at Christ Church Cathedral in New Orleans and to the priesthood at Grace Memorial Episcopal Church in Hammond, Kit was first called to a curacy at the Church of St. Michael and St. George in St. Louis, and served there until March 2015 when she and her husband Bill joined the Trinity Episcopal community in New Orleans. Kit is currently discerning her next church calling.

The Rev. Yolanda A. Rolle currently serves as the Episcopal chaplain at Howard University.  She received her Master of Divinity from Yale Divinity School and her Diploma in Anglican Studies from Berkeley in 2015, after which Yolande and her wife, Simone, lived in Boston. Prior to seminary, Yolande had earned a Ph.D. in Mathematics and Mathematics Education from the University of Nebraska and was an assistant professor at Boston University and at the College of the Bahamas. She is also currently a mathematics teacher and CTTL research and program associate at St. Andrew’s Episcopal School in Potomac, MD and serves as priest associate at The Church of the Holy Comforter in Washington. In her service to Berkeley, Yolande has been an engaged member of the BDS Dean’s Advisory Council in Washington, D.C.

Margaret Marshall is the retired Chief Justice of the Massachusetts Supreme Judicial Court, the first woman to hold that position. Born in Newcastle, South Africa, she emigrated to the United States, becoming a US citizen in 1977. She earned a master’s degree in education from Harvard in 1969, and a law degree from Yale in 1976.  Following her graduation from the Yale Law School, she practiced law for 16 years and became a partner in the Boston firm of Choate, Hall & Stewart LLP. Margaret was Vice President and General Counsel of Harvard University from 1992 to 1996. She currently serves as senior counsel at Choate Hall & Stewart and is a senior research fellow at Harvard Law School.  She has served as president of the Boston Bar Association, president of the United States Conference of Chief Justices, and chair of the board of the National Center for State Courts. In addition to her service as Yale trustee, she chaired Yale’s Advisory Committee on Campus Climate, which focused on the University’s efforts to prevent and respond to sexual misconduct. Yale awarded Margaret an honorary degree, Doctor of Laws, recognizing her lifelong devotion to the pursuit of justice and changing the legal landscape as well as graciously and generously offering wise counsel to Yale as an engaged and devoted trustee.  A lifelong Anglican/Episcopalian, Margaret is a parishioner of Trinity Church Boston (Copley Square).  Her late husband, Anthony Lewis, was a two-time Pulitzer prize-winning columnist for the New York Times.

The Rev. Dwight Zscheile is Vice President of Innovation and Associate Professor of Congregational Mission and Leadership at Luther Seminary in St. Paul, MN.  A graduate of Stanford, he received a Master of Divinity degree from Yale Divinity School in 1998. He served as the Media and Church Relations Director for Berkeley 1999-2001.  Dwight was ordained in The Episcopal Church in 2005 and has served on mission and leadership task forces in the Dioceses of Minnesota and Virginia, and on the Task Force for Reimagining the Episcopal Church. In 2008 he completed his PhD at Luther Seminary, with a focus on congregational mission and leadership, and joined the faculty. Dwight currently serves part-time as associate priest at St. Matthew’s Episcopal Church in St. Paul, alongside his wife, Blair Pogue, the rector. Dwight has consulted extensively with congregations, judicatory systems, and institutions of higher education on innovation, leadership, and adaptive change, and has written or edited five books, with a particular focus on missiology.