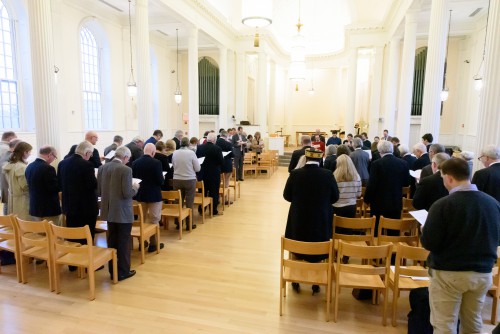 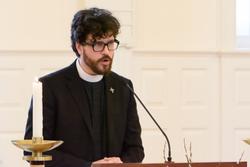 On October 13, 2018 the Parish of All Saints, Ashmont, MA held the Solemn Requiem Mass for the recently deceased F. Washington “Tony” Jarvis, founding director of ELM, the Educational Leadership and Ministry program.  It was not to be a memorial service, the Anglo-Catholic Jarvis had insisted shortly before his death.

This past Thursday, January 24, Berkeley Divinity School held its own service in honor of this friend and colleague. The timing of the service coincided with the winter BDS Board meeting. Trustees, YDS colleagues, friends, former ELM students and current Berkeley students gathered to honor Tony, both in the sacred liturgy that he loved so dearly and—somewhat in loving disagreement with his wishes—in fond remembrances of his special gifts. 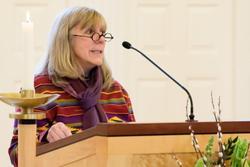 Professor Chloe Starr represented the faculty and Giuseppe Gagliano ’13 represented ELM graduates in scripture readings, and Jean Santopatre ’15 shared a loving memory of her professor and mentor. ELM director Jere Wells, along with past and present students and professional friends, reflected on Jarvis’s gift of “uncommon common sense,” captured in his well-known book With Love and Prayers: A Headmaster Speaks to the Next Generation. 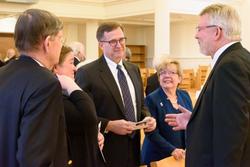 Dean Andrew McGowan, who insisted that his sermon was a homily and not a eulogy, honored his colleague and friend, summarizing the wisdom of the man, for whom “education was the inculcation of virtue …  not virtue for its own sake …  or preparation for employment, but preparation for all eternity.”

To view a recording of the service, please visit the YDS You Tube page.

On October 7, 2018, The Rev. F. Washington “Tony” Jarvis entered into his eternal rest. He was the founding director of ELM, the Educational Leadership and Ministry program sponsored by Berkeley for Yale Divinity School.

A native of Cleveland, Ohio, Tony earned his B.A. from Harvard and his Masters from Cambridge. After beginning his teaching career at University School in Cleveland, he went on to become headmaster of Roxbury Latin, the venerable Boston boys’ school, a position he held for thirty years. After retiring from Roxbury Latin, he served as chaplain at Eton College in the U.K and as scholar-in-residence in schools in Australia.  In 2008, Tony joined the staff at Berkeley as director of a new initiative for preparing Yale seminarians to be educational leaders in schools and colleges, as chaplains, instructors, or in other leadership roles. Tony’s own experience as a leader was a powerful example. In addition to his leadership of Roxbury Latin, he was highly respected by his peers in the independent school world and served as president of both the Headmasters Association of the U.S. and the Country Day School Headmasters Association. A widely published thought leader, Tony authored several books, including, And Still is Ours Today: The Story of Jesus, Schola Illustris: Roxbury Latin School 1645-1995, and his best-known work, With Love and Prayers: A Headmaster Speaks to the Next Generation, a collection of his remarks to the boys of Roxbury Latin.

Even with the breadth and depth of professional expertise that Tony could share with his ELM students, he was at heart a leader with a clear, straightforward message. “Father Jarvis taught me that the most important quality of a good schoolmaster is to know and love my students,” recalls Win Bassett ‘15, an English teacher at Montgomery Bell Academy in Nashville.  Yet there was little mushy or sentimental about the man.  Tyler Montgomery ‘15, chaplain and teacher at Woodberry Forest School in Virginia (and former chaplain at William & Mary), notes that “he loved his students and friends and defended them passionately; he could also be irascible, opinionated and curmudgeonly.”  Chief among his firmly held beliefs was his unapologetically forthright advocacy for the centrality of the Gospel as a powerful force in the education of young people.

Tony was also a fierce advocate for Berkeley. Editor of the Berkeley at Yale magazine, he championed the institution’s mission and encouraged all its students, not just those headed into education. In a congratulatory note to Tony upon the conferral of his honorary doctorate by Berkeley in 2016, Della Wager Wells, ’18 wrote, “You helped me to see that Berkeley was a place where someone of my age and provenance could fit and grow.  You made me welcome here. You were warm, kind, hilarious, irreverent, and entirely holy.” Tony was also a vital and beloved member of the Berkeley staff. He was particularly close to Pam Wesley-Gomez: “It was my privilege to consider Tony as both beloved friend and colleague. He was grateful and generous, which grounded his life in love and prayer.”

“There is an area of the wooden floor of St. Luke’s Chapel made sacred by the knees of Tony Jarvis,” recalls Berkeley Dean Andrew McGowan. “Tony’s faithful witness in prayer made its mark on a generation of students. Each morning he was present long before others, kneeling without any cushion or aid, commending the School and its students to God. This was the context in which his extraordinary work for ELM was done.”