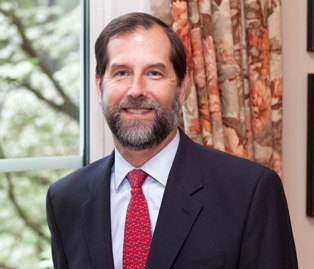 Dean Andrew McGowan is pleased to announce the appointment of Jere A. Wells as Interim Director of the ELM (Educational Leadership and Ministry) Program. The ELM Program was initiated in 2008 by Berkeley Divinity School for all members of Yale Divinity School and the university. It prepares students to work in school and college ministries.

Jere Wells brings an array of talents to the position. He is currently Assistant Headmaster of the prestigious Westminster Schools in Atlanta and Director of the Glenn Institute for Philanthropy and Service Learning. He is also Leadership Coordinator for the Large Schools Group of INDEX Research, and was recently Board Chair of the Secondary School Admission Test Board.

He has also contributed richly to the life of the Atlanta community. He has been a vestry member, teacher, and lector at All Saints’ Episcopal Church. He has served on the boards of Atlanta Medical Heritage, Friends of KIPP, Ansley Park Civic Association, The Schenck School, and The Children’s School. He has also served as a soccer coach for Atlanta Youth Soccer.

He is married to Della Wager Wells, an attorney who is currently a first year student at Berkeley. They have two adult children. His personal interests include travel, golf, skiing, fly-fishing, gardening, and cooking.

Dean McGowan remarks that “This appointment provides us with a highly capable and experienced educational leader to consolidate the current program, assist us with its funding, and bring new insights to its scope and mission.” Tony Jarvis, the Program’s current director, adds: “I am thrilled that Jere will be picking up the reins of the ELM Program. He is superbly qualified, personally and professionally, to take the program to a new level.”