Berkeley’s Dean was recently in Paris to preach at the consecration of Mark Edington as Bishop for the Convocation of Episcopal Churches in Europe. Dean McGowan’s sermon  offered a bracing view of the future of the Church and a call to consider apostolic ministry of a bishop as “less a Solomon putting stones one on the other, and more Moses or Miriam, rejoicing in God’s fiery cloudy pillar leading us, even singing and dancing before the people, into the promised future.” 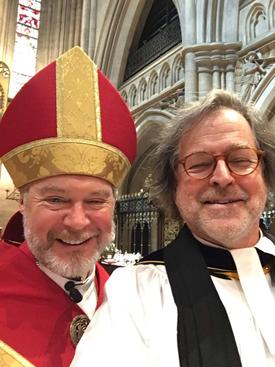 …the strangeness of an American Cathedral in Paris today is not only, or not so much, its presence among the outposts for one nation or culture in a foreign land, but the sheer audacity of the public witness of faith in what has been claimed by some measures as the most secular society of the West. According to a 2016 survey [from Institut Montaigne,] 39.6% of the French claimed no religion. France is at the forefront of western secularism; and it is probably a trend-setter, not an outlier.

So welcome, Mark and friends, to the future of the West. Secularization is as real as anthropogenic climate change, and it is rolling across the Atlantic like a tsunami.