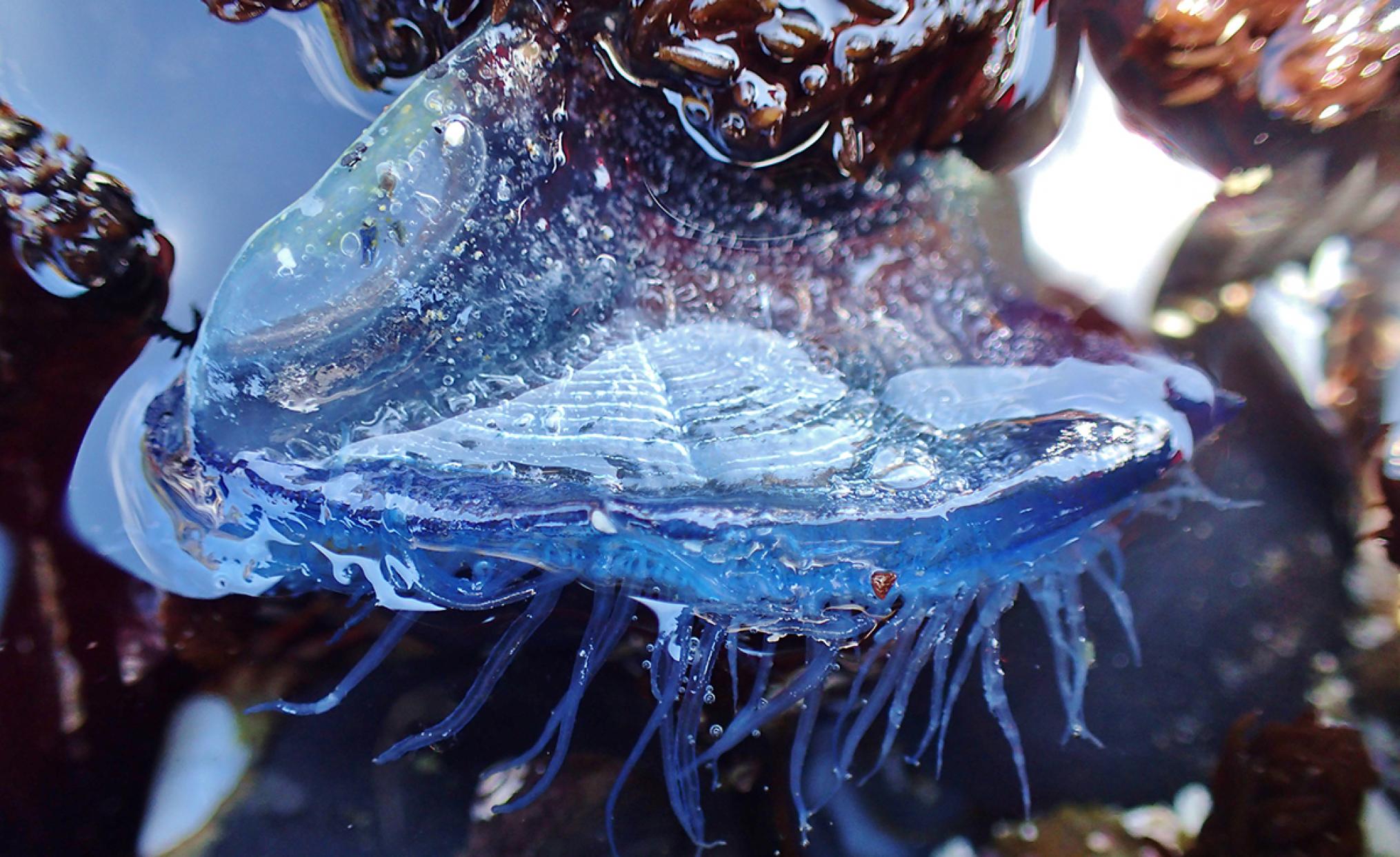 The woman with the net has been out there since daybreak, one foot up on the starboard railing, orange waders stark against gray sky. On my break from the wet lab—when last night’s trawl of rockfish, sardines, leptocephali, and lingcod have been sorted and measured and tallied—I join her, peering down the ten-foot drop from deck to swells. Before I can ask, she answers: “I’m Andrea, pelagic dynamics. I’m counting jellies,” and points to the field guide (Peterson’s Fishes, waterproof edition) open at her feet.

I’ve seen these jellies washed up on Oregon beaches, masses of tangled tentacles and shimmering floats staining the surf line blue. Velella velella, a free-floating hydrozoan—the name rolls off my tongue slick as the creature’s gelatinous, indigo flesh. Atop each body, a chitinous sail protrudes one inch upward, angled to catch northwesterly winds at 45 degrees. Riding currents and breezes, the jellies drift thousands of miles, aggregating in schools a million strong.

But during her shift today—and yesterday, and last week, and all of June, the usual peak abundance—Andrea hasn’t seen a single one. This could mean nothing. Cyclical reproducers, V. velella’s population oscillates naturally year to year. Or it could mean that with the seas warming and upwelling patterns shifting, this barrenness is merely a prelude of losses to come.

I don’t ask if she’s tired of watching. The wind’s whipped her cheeks to rosy patches. Gray-brown curls cling to her forehead, stiff with salt. Around her eyes, fine wrinkles radiate outward like phylogenetic branches. Her pupils blur as she scans the surface, watching the water slide past at 12 knots an hour, straining to glimpse small sails on the boundary between sky and sea.

This is science. Zero is data. Waiting is an outcome in itself.

On Sunday nights before the pandemic, I was often the first one at church. I entered through the back and fumbled for lights in the vestry, where chalices gleamed on dusty shelves and black cassocks hung eerily in closets. Alone in the sanctuary, I lit the altar torches. The sulfurous strike of matches echoed off the cold floor.

“Evening Compline, All Welcome,” said the sign in the window, but most weeks we were lucky to get a few folks from the Good Samaritan Home next door. Often, it was just the rector and me, two dark-clad figures flanking the altar, singing:

Guide us waking, O Lord, and guard us sleeping.

That awake we may watch with Christ,

And asleep we may rest in peace.

The F-sharp bell tone lingered in the chancel, then died in the empty pews.

I’m not sure I’d call what we did there holy. Most nights I went through the motions. The words weren’t enough to jolt me beyond this space of too-old hymnals and too-new carpet, this building wedged between campus and cow fields, this town that’s home-but-not-home. I longed for the gravitas of stone cathedrals and the footprints of others who’d knelt and prayed.

But other nights—when the streetlights gleamed through stained-glass windows and the cross cast shadows on the linoleum floor—I felt a stirring of something, a fullness that wasn’t quite presence but its pregnant, expectant cusp. As the rector’s voice dropped from C to G, landing the fifth with solemn finality, I felt pulled into continuity—if not with God, then at least with some early psalmist who decided long ago that absence need not equal silence, that one way to answer an emptiness was to sing.

There’s a name for creatures who live like V. velella: “pleuston,” species whose home is the interface between water and air. Pleuston are distinct from plankton (who float suspended in the water column) and nekton (who swim powerfully by their own propulsion, traversing from shallows to depths). Pleuston are defined by the property of living on a boundary: tied to the water for nutrients and reproduction, reliant on winds to move and disperse.

It wasn’t always this way. V. velella descended from sessile cnidarians, corals and anemones tethered to the sea floor. Once upon a time, a tiny medusa discovered it could drift, unrooted and unhindered, to colonize the surface of the sea. Over millennia, V. velella developed other adaptations: blue pigments to guard against UV radiation, a partnership with photosynthetic algae to harness sugars from the sun. This amazes me. Faced with the meeting of opposite habitats—gas to liquid, dry to wet—natural selection formed a creature whose very body is a conduit, a channel through which the air exchanges molecules with the sea.

It’s tempting to make this into a metaphor—to say something about the depths from which life comes and the lightness that grasps us in fleeting, yearning bursts. Do V. velella feel a tension between rootedness and wandering, substantiality and freedom? Do they share our awareness of fathoms below, expansiveness above, and an inability to fully probe or dwell in either place?

V. velella, of course, don’t think this way. (Hydrozoans have no central brain.) For a jellyfish, the skin of the sea is not a threshold of opposites, a jarring or comforting or interesting analogy. It’s simply a place—the place—to be.

The chapel is closed but not locked. This bothers me. It would be so easy to lean on the doors until they creak inward, then step across the threshold from tile to wood. Easy, and painfully incomplete.

Instead I stand in the foyer, lit by the rosy glow of the exit sign, snow dripping off my boots. Last March’s bulletin—that world before COVID—is still tacked to the whiteboard. The water in the font has long since evaporated, leaving a ring of calcified residue.

I used to come here seeking communion. I’d trudge up the hill between lab or class, therapy or hospital, bearing all kinds of wounds and emptinesses. Weakness of body, numbness of spirit. Shame, helplessness, brokenness, self-doubt, God-doubt, fear. Always, the chapel doors stood open, spilling organ music onto the sloping lawn. I’d stumble inside, expecting nothing, carrying everything, pulled by an irrational magnetism to this place where people sang of grace and love.

Always, I found a sense of expansiveness, a spacious energy that coaxed me to loosen my grip on my personal burdens and join in something larger, softer, shared. I’d name my pain to a God who was She or They, Black or White—a God who moved through the sway of curved hips, the vibration of guitar strings, the breath between stanzas of a poem. I’d hold hands and break bread, picturing the molecules contained in each mouthful: carbohydrates and minerals, harvested from solar energy and plant tissue, hewn into loaves by gentle hands. In the recesses of my body, I’d feel each bite dissolve and dissemble, assimilating into muscles and bones and blood and chromosomes, the material from outside transmuted into the architecture of me. For one moment, it felt impossible to be lonely. (“Though we are many, we are one body, because we all share in one bread.”)

Now, I don’t enter. I press my masked nose against the cross-shaped window, fogging the thick glass. Inside, chairs encircle a bare altar. Winter sun shines through the high windows, casting weak shafts on the oak floor.

Space without movement is emptiness. A chapel becomes sacred when the line between inside and outside, ordinary and holy, personal and collective, is crossed and traversed in continuous living flux.

For years, scientists couldn’t decide whether V. velella is one organism or several. In early taxonomic literature, the species is called a siphonophore, a colonial hydrozoan, whose millions of specialized cells (“polyps”) are independent entities cooperating to keep the group alive. Newer studies argue that each

V. velella is a single individual, one highly modified polyp, whose cells do different jobs but cohere as a functional whole.

From the evidence at hand, the answer isn’t obvious. If you view V. velella under a microscope, you’ll see four kinds of cells:

What you call these cells—parts of a whole, or wholes in themselves—depends on your perspective.

Ecologists, concerned with the movement of energy through multispecies systems, see one entity. Millions of cells do the work (reproducing, eating, stinging, moving) of a single creature, whose jellyfish-ness endures even as individual polyps wither and die.

Embryologists argue that each polyp meets the criteria of an organism—something that can copy and survive without others’ help. A newly cloned polyp, budding asexually from its parent, is a fully formed body, a perfect miniature medusa, which, given the chance, could found a colony of its own.

When does sharedness dissolve into oneness? When do the ties between millions of membrane-bound bodies—tethered by nerve networks, signal cascades, the magnetic lure of life for other life—invite an act of surrender, the emptying of one’s separate self for the fullness of a whole?

Andrea sees it first. “Humpback!” she shouts into her radio, and word spreads from trawl deck to galley, wet lab to cockpit. Whales aren’t unusual—we’ve seen 15 breaches today—but something in her tone demands a response.

Sunset. Purple clouds cling to the western horizon, lit from behind by a fiery orb. Rays of light penetrate downward, casting a rosy sheen on the flat black sea. I hear it before I see it. In the golden path that stretches like a bridge across open water, a single humpback slaps its tail.

The movement is graceful, wild, and haunting. Every few seconds, the tail curves up from the water like an archer’s bow, elegant and hulking. It hovers for a moment, catching the scarlet sun, then comes down with crushing force. Slap, splash! I can hear the impact from 200 yards away. The tail slaps over and over, in alluring, unyielding rhythm, leaving a wake of milky spume.

For 20 minutes, we stand in silence—me, Andrea, a half dozen other scientists, huddled on the steel platform of the flying bridge. Any of us could offer comment or explanation. Tail slapping (“lobtailing”) is a highly debated behavior. It might be a feeding strategy, a way to stun krill into submission. It might be a form of communication, a signal of warning (though whales have more efficient tools—clicks, whistles, pulsing calls—to convey a message). It might simply be play.

None of this matters. In the face of such arresting movement, such a display of mechanical and metabolic might, the only response is to witness, wonder, and watch.

Just after 9:30 p.m., the sun slips below the horizon. The sea turns the mottled, blue-pink sheen of a mussel shell. Soon the whale will be lost to the darkness, obscured by the gathering fog. As if it knows this, the tail’s pace becomes frantic, insistent, a throbbing drumbeat that builds in intensity until it matches the pace of my own mounting breath.

I let go of the guarded, measured gaze of a scientist. I let go of the voice that insists that whale talk isn’t human talk, that “faith” has no place on a research vessel. I let myself hear what I still, to this day, think the whale is trying to tell me—

Let life break you open! Let it sweep and submerge you, rippling across membranes and interstitial spaces, moving you to cries that are equal parts fullness and yearning, love and lament. Don’t worry if there isn’t an answer. You’re already held in a web of connection. Each tail slap—each song, word, or kneeling—is fueled by the fission of sun rays, the metabolism of plants, the dissolved bodies of millions of selves who are part of your whole. The movement itself is testimony to your hidden belonging. Cry out, and join in this desperate, flinging, costly, freeing thing we call prayer.