During the annual Convocation David Wilson, chairman of Berkeley’s Board of Trustees, conferred honorary degrees on three distinguished members of the church.

The Rt. Rev. Victor Atta-Baffoe, Bishop of the Anglican Diocese of Cape Coast in Ghana, received an honorary Doctor of Divinity degree in recognition of his “commitment to the gospel as it has been shared through the Anglican tradition, his passion for the work of preparing men and women for service in the church, and his vision of an Anglican Communion united in mission and ministry.”  He began his theological and ministerial formation at the St. Nicholas Seminary, and pursued further studies in London, Toronto, the Episcopal Divinity School and Yale Divinity School and in Ghana.  He served as a parish priest in Ghana and eventually returned to St. Nicholas as Dean of the Seminary. This year he became Bishop of the Anglican Diocese of Cape Coast.  On the day he received his honorary degree Bishop Atta-Baffoe delivered the Cheney Lecture on the topic of “Living in Communion with Anglicanism.”

Ann Dewey, a volunteer “extraordinaire” and long-time supporter of the Episcopal Church and Berkeley Divinity School, received an honorary Doctor of Humane Letters degree for her lifetime of service, her generosity, her dedication to the school and its principles, and her “large and compassionate heart.”  Ms. Dewey received a PhD in Greek and Latin from Columbia University where she developed the conviction, quoted in the citation on her honorary degree, that “Greece, Rome and the Judeo-Christian tradition represent the best that has been thought or said and must be handed down.”   She has had a lifelong commitment to education, serving on boards of several children’s schools, including the Episcopal School in New York.  She also filled four terms on Berkeley’s Board of Trustees, serving as co-chair of the board and the board’s Development Committee.

The Rt. Rev. R. William Franklin, Bishop of Western New York, was honored with an honorary Doctor of Divinity degree for his “lifetime of service to the church as scholar, and as teacher and as a recognized leader in the Episcopate.” An author and lecturer, Bishop Franklin, in the first part of his career, taught at St. John’s University in Minnesota and at General Theological Seminary in New York, and served as Dean of Berkeley Divinity School.  Then in mid-career he was called to the priesthood, serving as a priest in Boston and later at the Anglican Center in Rome, and in Philadelphia.  In 2010 he was elected Bishop of the Diocese of Western New York, where his vigorous leadership has been widely recognized. 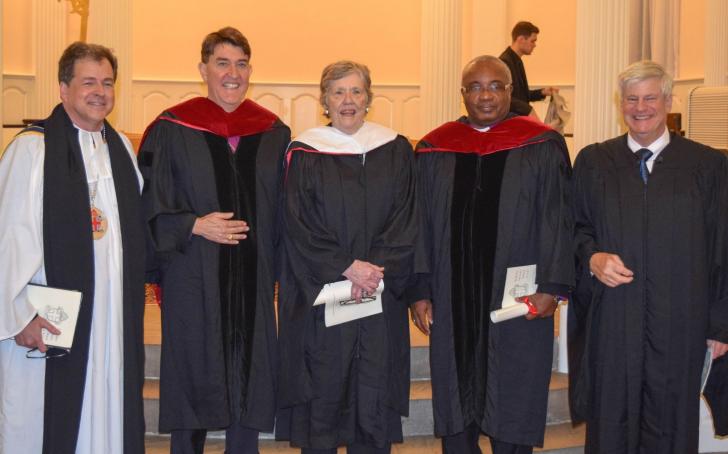