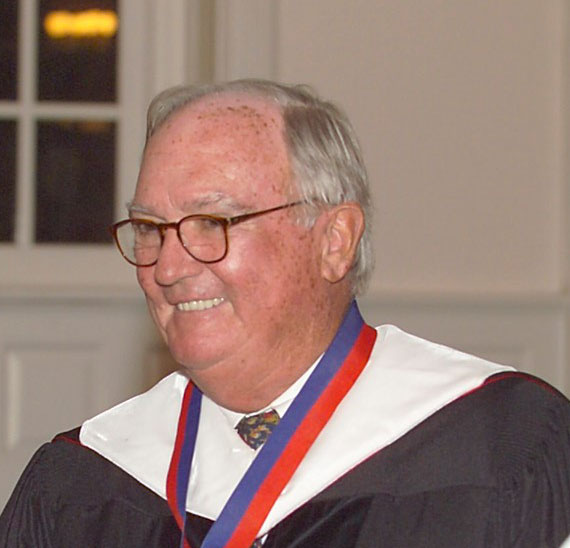 George Fowlkes, hon DHL ’99, passed away on Nantucket, Thursday, January 25, 2018. George was Chair of the Berkeley Divinity School Board of Trustees from 2003 to 2008, a challenging and important time for the School.

Born in New York City in 1935, he was a graduate of Princeton University and Harvard Business School, and was self-employed in real estate. Deeply committed to the Episcopal Church, George for years assumed leadership roles in a diverse group of Church-related entities too numerous to detail. His many offices in The Episcopal Church included having served as President of the Episcopal Church Foundation, as a Trustee of the Diocese of New York, as Warden of St. James’ Madison Avenue, and as a member of the College of Bishops Steering Committee

He also served as Chairman of the Nantucket Conservation Foundation, Inc. and as a trustee of the South Bronx Churches Housing Project. He was awarded the degree of Doctor of Humane Letters honoris causa by Berkeley in 1999, and joined the Board of Trustees in 2000. Elected Chair in 2003, he served a five-year term and then became a trustee emeritus, and continued to be a strong supporter of the School, offering counsel to subsequent Chairs and Deans.

When awarded his honorary degree, the citation included these words:

Always at the forefront of new, challenging initiatives, George demonstrated commitment, creativity and prophetic vision. He has taken on many weighty assignments that have called for significant amounts of time and energy. George motivates and empowers others with admirable skill and caring.

Berkeley’s faculty, staff, students and alums offer their prayers for George and his family as we give thanks for his life and work.