New to the network of Episcopal schools, Educational Leadership and Ministry (ELM) director Jere Wells attended the National Association of Episcopal Schools biennial conference November 10-11. Held at the New Orleans Marriott in the Crescent City, the conference was attended by over 600 chaplains, school heads, and other educators associated with Episcopal schools. The conference theme was “BEHOLD, I Will Do Something New!” and the programs focused on the ways that Episcopal schools respond to the challenges of modern culture by offering students the “opportunity … to view life in a new way,” as noted by NAES executive director Rev. Dan Heischman (BDS, ’76) in his Eucharist sermon. 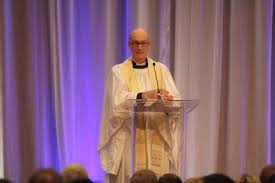 For the new ELM director, the conference offered not only excellent programs on topics ranging from Chaplaincy to Episcopal Identity, but also the chance to meet many BDS graduates, especially those who had participated in the ELM program with founding director Tony Jarvis.

With the help of former Berkeley Graduate Society President Whitney Edwards, now chaplain at St. Christopher’s School in Richmond, VA, Jere was able to meet many alums and learn about how Berkeley in general and ELM in particular had helped prepare Berkeley students for their careers. “Our alums are so enthusiastic about their Berkeley experience and are eager to share suggestions and networking opportunities for getting the word out about the valuable experience ELM offers aspiring school leaders,” Jere observes.  “I am very interested in learning how to spread the word about this distinctive program. For leaders in faith –based schools, ELM offers a uniquely valuable professional growth experience for educators of all sorts. More than ever, young people benefit from adult mentors who are both well-educated and deeply committed to the ethical and spiritual values characteristic of the Episcopal tradition.”

The conference was also an opportunity to catch up with many friends from Jere’s work in independent schools for the past 37 years. “I am inspired by what leaders like Ross Peters, head at St. George’s in Memphis, TN, and Christ Harth, provost at St. Andrews in Jackson, MS, are accomplishing at their schools. Episcopal schools are at the innovative forefront of America’s independent schools.”

And did Jere also manage to have a good time in the Big Easy? “They don’t say, ‘Laissez les bon temps rouler’ for nothing,” Jere observed—and left it at that.