April 23, 2019
Berkeley and numerous other communities have been stunned to hear of the deaths of trustee Stuart Kensinger and Angela Webb Kensinger, along with four others, in a recent plane crash in Texas. They are survived by their son Philip, a junior at Washington and Lee University, and other relatives.
Stuart and Angela were Yale College classmates, along with former trustee and BDS alum Nicholas Porter, and his wife Dorothy, graduating in 1986. Stuart was a real estate developer and investor, as well as being on numerous non-profit boards. Angie was a respected and long-serving varsity women’s lacrosse coach at Houston’s St John’s School.
Both Stuart and Angela had been involved with Nicholas and Dorothy Porter in Jerusalem Peacebuilders, which works with young Jewish, Muslim, and Christian youth from the USA and the Holy Land “providing them with the opportunities, relationships, and skills they need to become future leaders for peace in the global community.” Nicholas Porter commented on Stuart’s work with JPB: “He had a great sense of personal responsibility, and really a duty, based out of his Christian faith… that those of us who are blessed with much should share with others.”
Angie and Stuart were also active members of the Palmer Memorial Church in Houston, part of the Diocese of Texas. Their Rector, Neil Willard, is an alum of YDS and Berkeley (’95). The Kensingers and Palmer have recently been instrumental in welcoming BDS students undertaking Clinical Pastoral Education at the nearby Texas Medical Center, the largest in the world.
“Stuart and Angie were incredibly kind and generous and compassionate Christians,” Willard said in a statement released the day after the accident. “When they gave of themselves to the community, they gave from the heart and they gave freely out of love for God and love for their neighbor. Their loss is devastating for our congregation and for the City of Houston. Yet I know that both of them would want us to continue to work for peace in a world too often stripped of grace. May the witness of their lives to God’s mercy inspire us all.”
Stuart became a member of the Berkeley Board of Trustees in 2016. His distinguished service was acknowledged in his recent designation as Vice-Chair for Finance in succession to David Hyduke.
Berkeley’s Board was preparing to gather in the days immediately after the accident, and the Kensingers were remembered at the celebrations in St Luke’s and Marquand Chapels in Easter Week. Dean Andrew McGowan said “Stuart was a person of deep faith, evident compassion, and great commitment. His desire to live out his faith and to make a difference in the lives of others was inspiring, and this included his commitment to helping the School raise up inspiring leaders for The Episcopal Church. His contributions to Berkeley Divinity School are a source of abiding gratitude for us. We join with many others in our prayers for Philip and their wider families.” 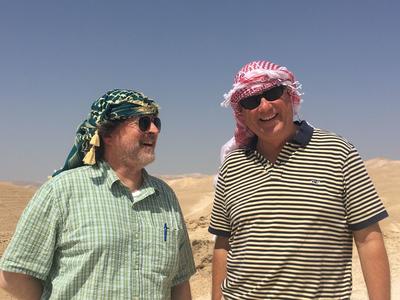 In 2017, Dean Andrew McGowan joined Stuart Kensinger and Nicholas Porter on a trip to Jerusalem, the West Bank, Galilee, and Gaza, exploring links with St George’s College, Jerusalem and other Holy Land institutions.  Their travels included a visit to the tomb of St John of Damascus at the Mar Saba monastery on the Wadi Kidron (pictured, above). On Easter Tuesday, the day after the accident, Berkeley students and friends found themselves singing St John’s Easter hymn, “The day of resurrection.”  The words include these:
From death to life eternal,
from earth unto the sky,
our Christ hath brought us over,
with hymns of victory.
Their interment and funeral services were held at Palmer Memorial Church on May 1.