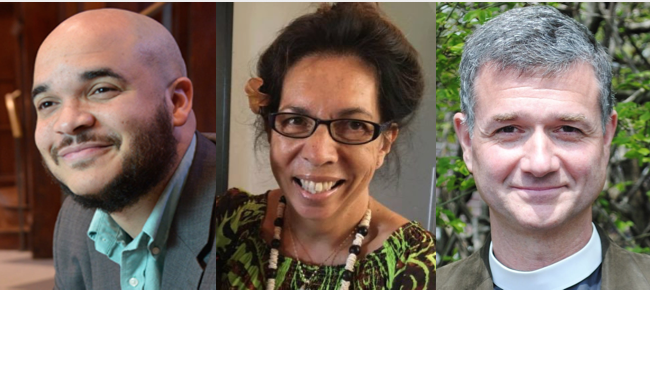 Taking a lesson from the pandemic playbook, Berkeley has continued to use Zoom for morning prayer on Wednesdays, inviting a diverse range of guest preachers from around the Episcopal Church and Anglican Communion.

While morning prayer has typically met in person throughout the Fall—sometimes on the East lawn of the Berkeley Center, sometimes in St. Luke’s Chapel—Berkeley has taken full advantage of Zoom for bringing a wide variety of guest preachers to the Berkeley community. As part of Berkeley’s commitment to diverse voices and perspectives, the Wednesday Visiting Preachers have often been BIPOC (Black/Indigenous/People of Color) and represented a breadth of ministries. One of the first guest preachers was Dawn Baity, missioner for Climate and Creation Care in the Convocation of Episcopal Churches in Europe. Also from fields afar was Jenny Te Paa Daniel of New Zealand (above, center), who received Berkeley’s honorary doctorate at Convocation 2020. Closer to home were Chaz Howard, chaplain of the University of Pennsylvania (above, left) and Eréndira Jiménez Esquinca, BDS 2019, founder of Spirit School in San Diego.  The final speakers of the series were Fletcher Harper (above, right), executive director of GreenFaith, and Chantal Morales McKinley, a consultant with Root, Thrive, Grow.

The Visiting Preacher Series, which is organized entirely by students and reflects their own breadth of interests and contacts, will be continued in the Spring semester.