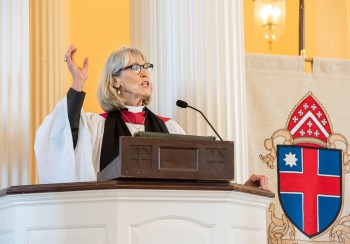 Associate Dean Cathy George preached at the Berkeley Evensong service, her full sermon is available below.

Andrew, Simon Peter’s brother, said to Jesus:  “There is a boy here”.

He was building a dam with sticks and rocks down at the creek when his mother called to him. “You’ve been invited to go into the countryside with your aunt and uncle.” When they came for him, his mother took him aside and asked him to be responsible for the day’s food. She didn’t have much to send  - - “save it for later in the day when you will all be hungry and tired” she said, placing the string handle of a fishnet bag into her son’s soft palm, and closing her fingers affectionately over his. “There are only two fish, you’ll need to divide them, but there is a barley loaf for each of you.” She kissed the crown of his head, and thanked her sister for inviting him, as the cousins ran off together.

First neighbors and then strangers joined the moving crowd as they walked the dusty road that led out into the open wilderness. The boy recognized Peter, loud, up in front, telling everyone where to go - what to do. And quieter Andrew, Peter’s brother, he’d often seen down at the shore with his boat. They were fishermen. They were different today. They weren’t talking about the last storm, the size of their catch, their boats and nets. They were talking about a person. Shy Andrew was telling the people he walked with that he liked to listen to this man who wasn’t even a fisherman.

Sprinting back to his cousins who were darting in and out of the throng of grownups playing a game with a tossed stone he yelled “we’re walking all the way to the Sea of Galilee to meet a man named Jesus” consumed with their game they paid no attention. As the sun drew nearer the horizon, people settled in clusters on the grassy hillside. Children log rolled down the steepest declines, and the boy climbed the hillside up to the blanket his aunt was sitting on for a drink of water from his uncle’s flask. As he sat and drank he noticed how hungry he was.

Just as he lifted the corner of the blanket where he’d hid his bag of food, he heard Andrew call out “does anyone have any food to share?”  Quickly he hid the bag back under the blanket. He barely had enough for his family.

He looked around. The crowd was huge. He couldn’t see to the front. He couldn’t see to the back. He promised his mother he would be responsible for his family’s food. Andrew asked everyone he passed:  “Do you have any food to share?” Reaching under the blanket he took the fishnet bag and tucked it beneath his tunic, and shifted over to lean against his uncle’s sturdy back. Andrew’s voice grew louder as he came closer. “Does anyone have any food to share?” Looking down as Andrew passed by. Shaking his head back and forth his uncle muttered “no” so quietly only the boy and the blanket could hear.

The boy felt something stir inside himself, something deeper than his hunger and it propelled him to move. Wrapping his arms around his chest, holding the food under his shirt and he stood up and followed after Andrew. He called to him, but Andrew didn’t hear him. He reached for his robe but his grip slipped down the cloth. Loosening the opening of his fishnet bag the courageous boy pulled out a barley loaf. Reaching forward he planted it in Andrew’s calloused hand. Andrew looked down, and saw the loaf of bread and the hand of a young boy holding it. Letting go of the bread, Andrew stooped down, took the boy’s hand and led him through the crowd to two men who were arguing. Exasperated Philip, was speaking sharply to a man the boy had never seen before saying:  “Six months salary won’t begin to feed a crowd this size.”

Ignoring Philip, Andrew turned to the stranger:  “There’s a boy here who has five barley loaves and two fish; but what are they among so many?” The stranger looked down at the boy. His kind eyes smiled at him. Jesus told Philip and Andrew to “make the people sit down” as Philip rolled his eyes in disbelief.

Jesus knelt on the grass next to the young boy, “You must be hungry.” The boy nodded. “You’re giving away your food?” The boy nodded. “You’re going to feed a lot of people today,” Jesus said to him. Taking the bread and fish in his hands he lifted them up, high into the air. The grace of the heavens – the generative love of God searching for the fearless heart of that little boy to ignite its power  - - and blessing the bread, Jesus tore off a large piece and handed it to the boy, and then a piece of the dried fish. Hungry, tired people passed loaves of bread and fish, tore off pieces, and ate. All the people were fed - not by the resources of Jesus’ unprepared and nervous staff, but by the resources of a young boy whose supply was a wholly inadequate solution to the problem they faced until he gave it to Jesus, and like fossil fuel meeting oxygen to create light and heat, his gift merged with the grace of God and combusted into abundance.

It’s tempting to translate the story into something we can grasp. Construe it as a great symbol feast. The multiplication of loaves and fishes must be a sign for something more sophisticated than bread: the piece of God in everyone, the abundance of forgiveness, the generative power of love – something more important than bread. People with full stomachs, like us, think like that. They were hungry at the end of a long day of walking, and the sun was setting. They needed rest and food so He gave them bread, because a boy walked away from the security of the family blanket, and disobeyed his mother’s instructions to be responsible for the family food, followed another authority, the authority of the Spirit of the living God that stirred in him  - -widening the definition of family far beyond his kind uncle and loving mother.

For just a moment, I will indulge that temptation turn this miracle into something we can explain. Maybe, just maybe…  the boy’s fishnet bag opened and his food was offered and it multiplied and because the Divine spirit that stirred in him, the perfect love that casts out fear summoned to that hillside loosened all the knapsacks tied shut, opened every basket buried under blankets, reached for every loaf tucked beneath a baby wrapped in a shawl. Maybe the others, just like his aunt and uncle, couldn’t give away what they’d brought. They held their food in secret because they were smart and responsible and their wasn’t enough to go around! Fearful hungry people responsibly caring for their families  - - all across that hillside  - - and when the Spirit touched the soul of one boy and that offering was brought to Jesus, maybe the grace of God moved across the evening at dusk and inspired one hungry person after another to open, to offer, to share what they were hiding.

Sister Delio writes: “God is radically involved with the world, empowering it toward fullness in love, but God is unable to bring about this fullness without the cooperation of humans.”

Graduates,  Give Jesus all you have. Don’t save it. Don’t hide it. Don’t store it up for yourself in secret for fear there’s not enough. There is enough, there was so much more than enough on that grassy hillside. That is what is ahead for you, graduates, the unimaginable abundance that transpires when your hard earned gifts are given over and taken up into the power of the living God, the unimaginable.

Jesus resists the attention this miracle brings on him, as he so often does. They finish eating, and Jesus’ intuition nudges at him. He sees something in the eyes of a small group that begins to gather and makes their way toward him. He ducks left - finds an opening and snakes through the crowd. Our lesson puts it like this: “When Jesus realized that they were about to come and take him by force to make him king, he withdrew to the mountain by himself.” He knew.  They were coming for him to hoist him up on their shoulders, their one -man bread king hero. They didn’t get what made the miracle happen. If he was a miracle- working- carnival –bread- king he would have lit a fire and grilled lamb, uncorked fine red wine and turned the hillside into blankets of white linen. God didn’t rain magic fish and abracadabra barley loaves.

Jesus’ sacred heart, shining with grace burned across that hillside, seeking the soft mercy center in the boy’s hungry heart and the mutual power of heaven and earth were ignited to accomplish the unimaginable.

Beloved graduates as you walk across this threshold into God’s mission fields, whole new vistas will open for you. Open your fishnet bags, offer what you keep stored in secret for fear there is not enough. What you have to offer as you leave this campus - miniscule as it feels, given the problems we are up against is more than enough. God will use it, God will use you.  And as you go, may God bless you, and keep you, and hold you in the embrace of those everlasting arms.