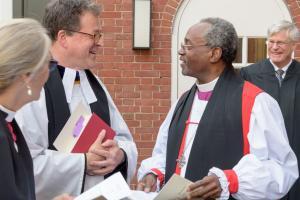 Convocation is an annual celebration of the life of Berkeley and Yale Divinity Schools, held in October.

In recent times the week of Convocation has begun with Berkeley’s own Convocation events, including the annual Graduate Society luncheon, the Cheney Lecture (in an area related to pastoral theology) and Pitt Lecture (on preaching or related to global Christianity) in alternate years, and Evensong including conferral of honorary degrees.

In 2016 honorary degrees were conferred on the Rev’d Tony Jarvis (former Headmaster of Roxbury Latin School, and founding director of Berkeley’s ELM program), the Rt Rev’d George Sumner ‘81 (Bishop of Dallas, TEC), and Bruce Garner (President of Integrity USA). In 2015 honorary degrees were conferred on Carl T. Anderson (Chair Emeritus of the Berkeley Board of Trustees), the Rt Rev’d Audrey C. Scanlan ’03 (Bishop of Central Pennsylvania), and the Rt Rev’d Kenneth A. Kearon (Bishop of Limerick and Killaloe).

Yale Divinity School Convocation and Reunions follow in the same week, including the Beecher Lectures, Alumni/ae awards, and other celebrations. More information about YDS Convocation is found here.