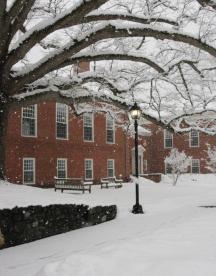 In 1854, Bishop John Williams of Connecticut saw the need for a new seminary to be a mediating influence during a time of theological division in the Episcopal Church. Williams founded the Berkeley Divinity School in Middletown, Connecticut, as a place where students from the various streams of Anglicanism could learn, worship, live and minister alongside one another.

Berkeley’s name honors an earlier American experiment in higher education. The Anglo-Irish bishop and philosopher George Berkeley dreamed of building a seminary in the New World that would express the breadth of the Anglican tradition in new environs. While Berkeley’s vision never materialized in his own lifetime, he left his farm in Newport, Rhode Island, and library of theological books to the youthful Yale College in 1733. Yale became one of the earliest accepted places for Anglican candidates for ministry in America to read theology, graduating such pioneers as Samuel Seabury, the first bishop in The Episcopal Church.

After founding Berkeley, Bishop Williams, who later became Presiding Bishop of the Episcopal Church, served as Dean of the School himself until 1899. As indicated by the School’s motto, in illa quae ultra sunt (“into the regions beyond”), the seminary has for over 150 years prepared clergy, educators and other leaders to serve throughout the church as part of its mission of “restoring all people to unity with God and each other in Christ.”

In 1928, Dean William Palmer Ladd moved Berkeley Divinity School to New Haven, adjacent to the campus of Yale University, both to make advantage of the resources of the University and to immerse the students in the new social reality of the industrial city. A pioneer of the Liturgical Movement in the Episcopal Church, Dean Ladd envisioned a vibrant sacramental life nourishing an ongoing commitment to social justice that continues to shape Berkeley’s mission to this day.

As a seminary of the Episcopal Church, Berkeley affiliated with Yale Divinity School in 1971, making it the only Episcopal seminary to be fully associated with a major research university. While Berkeley retains its distinctive Anglican identity and retains an independent board of trustees and administration, its students are admitted by and fully enrolled as members of Yale Divinity School. As Episcopalians, Berkeley students are formed by the centrality of daily corporate worship, deliberate attention to the spiritual life, and a concentrated course of study in Anglican history and theology. At the same time, they are incorporated into the rigorous academic program of a divinity school with a world-renowned faculty and library, and also have available to them the full resources of the various professional schools, departments, and extra-curricular programs of the University.

I knew that I wanted to come to a place where I could deepen my grasp of the fundamentals of Christian religion, while also continuing my ecumenical emphasis.
Jenn Strawbridge '04
Associate Professor of NT
Oxford University
Berkeley Divinity School is part of a larger ecumenical community that offers a great combination of academic learning and theology. What I love most is the integration of community and worship, which includes faculty, students and staff. Berkeley offers the opportunity to experience a wonderful model of formation in communion and in community.
Rachel Hatch '08
Research Manager
Institute for the Future, Palo Alto, CA